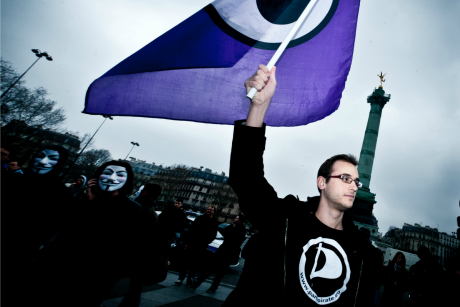 « The European elections will be a soapbox for new French political parties, including the Pirate Party, and Cannabis Without Borders. EurActiv France reports.

The European elections have always attracted alternative political parties. They are a chance for lesser-known political movements to voice their opinions at a European level.

The upcoming elections in May will not be any different, as candidates from all political shapes and sizes are ready to meet the wider public.

With an eye on the elections, the Pirate Party has launched a transnational European Pirate Party (PPEU). They already have two members in the European Parliament, Amelia Andersdotter and Christian Engstrom, from Sweden.

Their spokesperson states that “we already have a common programme for all Pirate parties in Europe, and we officially launched the European Pirate Party in Brussels on the 23 March”. Their policies include, but are not restricted to, the enlargement of Europe, renewing democracy, and fighting for free access to all human knowledge. In France, where the party will run in the European elections for the first time ever, winning a seat will be difficult. However, they stand a chance in countries like Germany, where they have managed to successfully integrate into political life.

The Pirates have also put forward a candidate for the presidency of the European Commission, the position currently held by José Manuel Barroso. The candidate, MEP Andersdotter, is head of the European Pirate Party and former spokeswoman for Pirate Bay, the controversial downloading website.

There are other pan-European parties, like Europe – Democracy – Esperanto, who advocate a Europe that respects the linguistic rights of citizens. Their main policy is to promote the use of Esperanto instead of English in order to establish fairer communication within Europe. “We are only present for the European elections, because the matter of linguistics cannot only be national alone” states Bert Schuman, candidate in the 2009 European elections.

Newropeans, a pro-European party, are also running in the European elections and already presented candidates in France, Germany and Hollande in 2009. Their main policy is to establish a parliament for the Eurozone, or the « Euroland ».

After leaving the French Democratic Movement party in 2010, MEP Corrine Lepage has entered the European race with “Indépendante Europe Citoyenne” (Independent European Citizen). The MEP will lead a list made up of candidates from different political backgrounds, all united under the pro-Europe banner and focusing on issues such as the environment.

The Popular European Party, allied with Corrine Lepage’s party, was started two months ago. Led by Cyril Castro, former advisor to the French Democratic and Independent Union, the young party focuses on the integration of some member states in only the most important sectors. “The integration of 28 states is not realistic. The EU can of course enlarge, but it must preserve a “hard core” to allow for effective political integration” claimed Laurent Daniel, vice-president of the party.

The New Anti-Capitalist Party (Nouvau Parti Anticapitaliste) will also concentrate on the European elections, as they are “a chance to fervently condemn European austerity policies”, explains Yvan Lemaitre, one of its leading members. “Europe must represent cooperation in the wake of the failed capitalist system”. For these elections, the party has refused any alliance with its 2009 ally, the Left Front (Le Front de Gauche), over fundamental disagreements about the European project. “We come from an international tradition and therefore have a sensibitive relationship with the European project. We believe that the future lies in the cooperation of peoples”, states Lemaitre.

The new party Us Citizens (Nous Citoyens) will also run in the elections for the first time. “We are made up of optimistic citizens who want to make a difference” claims Thomas Houdaille, general delegate of the party. To find candidates for the seven districts in which they plan to run, the party launched an Internet-based call for candidates. So far, almost 400 people have applied.

The European elections would be nothing without the weird and the wonderful. In true European election spirit, the “Cannabis sans Frontières” (Cannabis without borders) movement promotes the liberalisation of drug use across Europe.

The Royal Alliance (Alliance Royale) has also signed up under the slogan, “a royal France at the heart of Europe”. The head of the party confirms that “we are in the process of finalising a list for the European elections”. In 2009, the royalists recorded 0.05% of votes in the Paris area. Nationalists, Royal Alliance “is open to alliances with political arrangements in other European countries that share their views”.

For all lists, the major problem is to be well-known and to find room in an already saturated media. “If we could communicate with more citizens, we could secure a protest vote” stated a Pirate Party spokesman.

In order to gain media coverage, the parties must provide five candidate lists in eight of the French constituencies. If the parties cross this threshold, they can broadcast their campaign on national radio and television for free.

Stéphane Guyot, president of Citizens of the White Vote (Citoyens du Vote Blanc), stated on his party’s website: “We must present at least 5 lists. This is the condition which would allow us free access to the official videos of the information campaign broadcasted on national television channels.”

This condition entails others, the most important of which is the sheer cost of a campaign. Even medium-sized parties criticise the costs of presenting candidates and running a campaign for the European elections.

“It is very difficult for small parties to raise enough funds to pay for printed propaganda. This system benefits big parties who can afford to buy public opinion” says Laurent Daniel, vice-president of Europe Populaire and candidate on Corrine Lepage’s list for the North West of France.

Political programmes and ballots sent to the electors are printed by candidates, but can be reimbursed by the state if they achieve over 3% of the vote. This has caused debate in the past, but electoral propaganda is an issue which has still not been solved.

The stakes are high for small parties. In the 2009 European elections, 27 candidates ran for the Ile-de-France constituency. Only five won a seat in the European parliament.