« Which nations bucked the trend in the Euro elections and surged towards leftwing parties? » 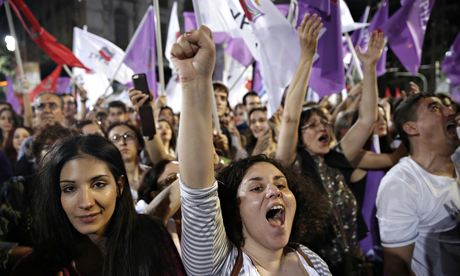 The headline gains were for nationalist and Eurosceptic parties – witness all those pictures of « evil » Nigel Farage smiling into his pint glass, or of Marine Le Pen, whose Front National party triumphed in France, throwing back her head and cackling. But some member nations bucked the trend in the Euro elections and registered a surge towards leftwing candidates. Here’s who: 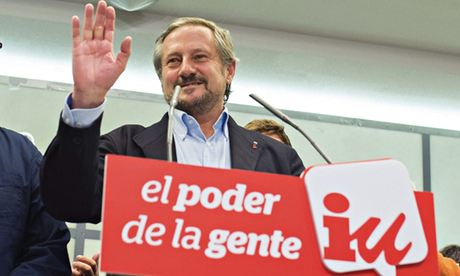 Willy Meyer of Spain’s United Left party, which gained around 12 seats. Photograph: Fernando Villar/EPAThe People’s party was one of the few governing parties to win the largest portion of the vote. But it’s the large gains by leftwing parties that are exciting political commentators. Between them, the two dominant political parties (People’s party and Socialist party) lost five million votes compared with their 2009 performance. Meanwhile, the protest partyPodemos (« We can ») took nearly 8% of the vote and five seats. Podemos was formed only four months ago, having grown out of the Spanishindignados who camped out in Madrid’s Puerta del Sol square in 2011. Coalition group United Left also gained four seats, further increasing the voice of the left in parliament. « It’s the hour of the people. This is only the beginning, » Podemos’s leader Pablo Iglesias, tweeted. « Clearly, we can. »

First, the bad news. The neo-Nazi Golden Dawn party claimed three seats, its first MEPs, with around 9.37% of the vote – a huge improvement on its 2009 performance, in which it polled less than 0.5%. But the overall winner in Greece was the leftwing opposition party Syriza, which campaigned against the government’s austerity policies. Partial results indicate it won the vote by three or four points from the governing New Democracy party. 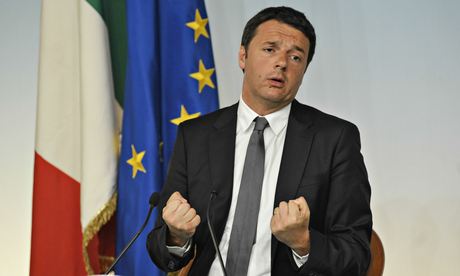 Italian prime minister Matteo Renzi, whose centre-left Democratic party exceeded expections. Photograph: Rex FeaturesPrime minister Matteo Renzi and his centre-left Democratic party exceeded expectations to win just over 40% of the vote. The Five Star Movement led by the former comedian Beppe Grillo, an anti-establishment, anti-European party, came second but with fewer votes than expected. Forza Italia, the party of Silvio Berlusconi, took its lowest ever vote share. Italy, the stable heart of Europe: you heard it here first. The massive endorsement of Renzi, however, is very much a matter of national politics. He was the elected mayor of Florence and holds no seat in parliament; he became prime minister in February at the invitation of Italian president Giorgio Napolitano. The result gives him the mandate he lacked. 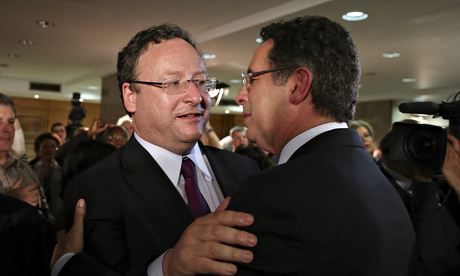 Socialist party candidate Francisco Assis (left) embraces the party leader Antonio Jose Seguro after their election victory. Photograph: Tiago Petinga/EPA« From Dublin to Lublin, from Portugal to Pomerania, the pitchfork-wielding populists are converging on the Breydel building in Brussels – drunk on local hooch and chanting nationalist slogans and preparing to give the federalist machinery a good old kicking with their authentically folkloric clogs, » Boris Johnson wrote in the Telegraph on Monday. Actually, this is a little unfair on Portugal, which Johnson may have included for alliterative reasons. There was no emergence of a particularly Eurosceptic party. The country’s opposition Socialist party topped the poll with around 31.5% – leaving the ruling Social Democratic party in second place. The victory was driven by an electorate registering its objection to austerity measures; the country exited its ¤78bn (£63bn) euro bailout programme earlier this month.

You would be hard pushed to call it a surge. Only around 13% of the Slovakian electorate voted – and they voted in support of the ruling Smersocialist party. Eurosceptic liberals SaS got one seat. But the dominant mode of Euroscepticism here is Euroabstention. 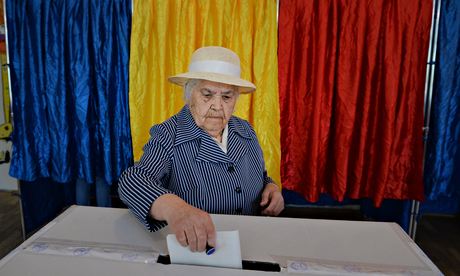 Farage put Romania firmly on the British political agenda. But there has been no Eurosceptic backlash in Romania, where preliminary data indicates that the governing alliance of the Romanian Social Democratic party prime minister Victor Ponta is on course to win 37.3% of votes. Let’s hope that Farage gets to sit next to some nice Romanian MEPs.

Note: This article was amended on May 27, 2014. The original stated that United Left had gained around 12 seats. This figure referred to the total gains of the anti-bailout hard-left group in the European Parliament. United Left gained four seats.