UKIP have overtaken Labour in voting intention for the forthcoming European elections :

« In the latest YouGov survey for the Sunday Times, the Eurosceptic party have moved into first place for the May 22nd European Parliament elections. UKIP are now on 31%, up from 23% on March 18th. Labour have consistently polled first, however they now move into second on 28%, down from 32% over the same period. The Conservatives remain in third, on 19%, down from 24%.

Earlier in the week when YouGov showed people pictures of UKIP campaign adverts, branded “racist” and “offensive” by some people, the majority disagreed, and 57% agreed with Nigel Farage that they are a “hard-hitting reflection of reality”.

However, only 20% says the party has workable policies and could make a genuine contribution to running the country. 57%, on the other hand – including 21% of UKIP supporters – say they are a protest party who are unhappy with the main parties and don’t have realistic policies for running the country. 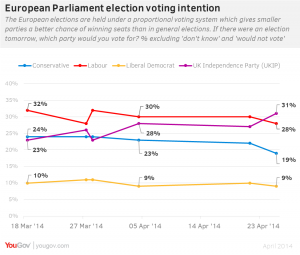